Being a human is chaotic. It’s a gross, sticky, slippery, sad, angry and sometimes downright yucky experience. I can say out of 42 years of life it’s not always been yucky but it’s the most awful times that allow you to appreciate the rainbow after the storm. It sounds cliche but there’s truth to it.

I have a terrible habit of not letting God show me the direction I should go. Yes, I said God because I do believe He’s out there. I also believe in destiny, fate, soul mates and even being somehow star-crossed. As a human I get confused, angry and even afraid when I don’t know what’s going to hurt me, or the ones I love. Just like most people I don’t want to make a mistake and spend years trying to correct it, move on or carry it with me as baggage but it’s in those times I cling to desperately try and learn whatever lesson it is that I need to so nothing will be repeated; so I don’t go through more pain. Sometimes I use my head too much and other times my heart is pinned to my sleeve. I trust people a bit too easily and I go way past where I should when helping someone.

Up until last night I was being dealt blow after blow. An onslaught of Murphy’s law applied here. What can go wrong, will go wrong. And it did. And I was entirely alone in the thick of it. I allowed myself to be toyed with at a very vulnerable time and as everything started crashing down- as if someone turned the strongest force of gravity back on from a weightless planet I could only panic inside. I wanted to escape and fast. Not from just what was currently happening but from a life I saw of endless depression, set backs, tragedies, bad memories, helplessness, hopelessness and unrelenting pain (mostly mental). I had spent so many hours sobbing that my face puffed up and was swollen. I had fluid sitting in my face and I could barely see. Already I hadn’t eaten in a couple of days and was definitely as white as a bleached linen. I would go for a drive then just start sobbing. I was in a full blown nervous breakdown/meltdown. And then I got a phone call yesterday evening. A family member I had been quite close to when I was a teen had died.

For a moment everything stopped as if it was suspended in mid air. While the world was suspended all the memories I had from those days with them hit me in rapid fire. I had just passed the anniversary date 2 days prior of my sister being killed, my world was unraveling, I couldn’t stop sobbing, I had lost so much already in life, including my husband- my best friend in life due to beurocracy and my dad asked me; are you okay? I couldn’t say anything but- no!, I’m not. Now I think my dad thought it was probably the loss and also the timing- which it was and he reassured me it was okay to feel sad but there was so much piled into what was behind my answer to his question. When I was younger I got used to responding to ‘are you okay’ with, “yeah I’m fine” on autopilot. I decided around 2020 that I was no longer going to try to placate people who asked me if I was okay. I was going to just be honest about it and if they were uncomfortable or didn’t want to ask questions- then so be it! At least I was being honest with myself and saying, no I’m not okay, even if it was to validate myself out loud and it helped me a lot. To just admit “no, I’m not okay” out loud.

After the phone call ended, I had managed to keep it together to finish the call, everything that was crashing and then had stopped to suspend sort of calmly dropped like it was being placed gently back onto the earth. I sat and sobbed some more and called my mom to really talk about everything going on. We talked for over 3 hours and dammit if I didn’t start to make sense out of so much that had happened. Between that call and a complete stranger hours prior reminding me I have some value to this world, I was able to start to make sense of a lot that was occurring. I blamed myself for some things that simply weren’t about me at all; that I was led to believe were my fault. But when chaos stops, the mind games stop, you can finally sort it out and realize the logistics of what is actually happening. That’s what happened! God was telling me- HEY! YOU’RE NOT PAYING ATTENTION! YOU’RE HEADED RIGHT FOR THE CLIFF! STOP!! He’s throwing everything my way and I’m just once again ignoring it all. The thing is though I’m getting older and I don’t have as many years to keep messing up and then trying to fix it. He wants me to have the peace I’ve desperately begged him my whole life for. I’m trying but sometimes I’m trying too hard.

There is fate, there is destiny but we also have the entire free will to choose whether or not to take every step we do and make each decision we make. I’ll be a work in progress until I’m dead and I’m certain I’ll continue to make wrong decisions but my hope is that I’ll finally enjoy living, enjoy those in my life I love, make some right choices and finally have some peace. Peace in my own head and peace in my every day life. I won’t get the miracle I want; I’m accepting that and grieving over that but maybe I can at least continue to love peacefully. -Katie

I had a dream with my love last night but I also had a nightmare with the ghost of you. Everything was my fault and I watched as your body burned. Instead of turning to ash you melted away until there was no evidence you were ever there. I could do nothing but watch you be erased from this world.

Instead I woke after watching you little sister, be erased. I woke up alone, frightened, sad and sick. I’ve watched you be erased once in real life but to witness it again broke something in me. Every year I think this time it’ll be different. This time I also won’t be alone. But it’s always the same and I’m always alone. I can sit and realize things are dreams, but also that life doesn’t feel real anymore and that I’m not okay. I’ve lived, yes, but with being hurt, betrayed, abused and abandoned. That I’m glad you never experienced.

I’m so glad you were always smiling and every time I remember how you were taken from this world I hope in my heart you were smiling. I hope your last thoughts were of the things and people you love most and who love you most. So quickly that there was no moment of pain. I hope you simply blinked and then were arriving on Heaven’s doorstep being greeted by angels.

Now I have to finish my time here before I see you again. So many people have treated me horribly that I can’t even pull myself up again and realize how I should be loved. I’m far from perfect but I’ve always tried to be honest and caring towards those I’ve loved. Devoting every part of my being to them. Hoping, wishing and praying I’d feel loved in return. Yet I’ve spent the last decade lost, sad and alone. I’ve spent every night having nightmares then waking to a worse nightmare; life. I always thought there was some purpose to me being alive still but it wasn’t until a pandemic and a 42nd birthday that I realized even if the rest of my life is a matter of hours I feel loved. The people in my life love me. Even when I don’t love myself they love me.

“And still, after all this time, the sun has never said to the earth, “you owe me”. Look what happens with love like that. It lights up the sky.” -Rumi

There’s something cathartic in realizing someone out there loves you as you are and nothing more or less. Someone who is just like you. Call it a soul mate, best friend or lover. They hold you up when the worst of humanity lets you down. They’ve loved you from before they knew you existed and from before they knew what love even was. The one person in existence that sees what you’re capable of; your strength, your power, your laughter and who wants you to always smile. They’ll do anything to see you happy because it makes them happy. They’ll wipe your tears and hold you no matter how many times you break down because someone else hurt you. This person will hold your hand when you’re going through the darkest moments in life when you’re thinking you’ll never make it. This person won’t feed lies into your head about how a true soul mate is only to tear you down and destroy you. They would never, ever hurt you; not deliberately and not by accident, because they love you and couldn’t fathom even making that mistake. And when your pain is easing, even if it’s only for a few moments, they know your pain and do everything they can to help you breathe. Life has prepared this person for you and you’ll always find them. They’ll always lift you up, keep you safe and will always, always love you unconditionally. You are held by them when you’re saying you’re not OK and they’ll give you the air from their lungs if it helps you exist. That is an amazing person with a beautiful capacity to love who was made for you. When the light is leaving your eyes and darkness is overwhelming they’ll always be your guide. They’ll always be there to save you. They will deserve your love and you will feel loved in a way you have never experienced nor could have known existed. They will teach you how to live. Their light is the beacon that keeps you going and makes you fall in love with them over and over again every day. 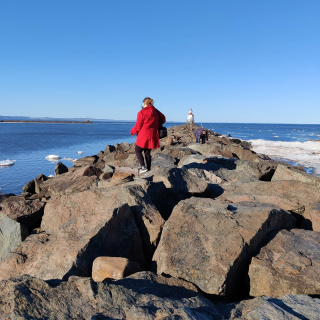 Each day when the sun rises, I hope that will be a day I've truly lived by the closing.